How to Feed a Nation

The miracle of the modern food supply

Here’s a simple question: It’s the middle of winter and you want grapes. What do you do?

The simple answer: You just walk into the grocery store and pick them up.

The slightly less simple answer: The American growing season is over. So, table grapes are harvested in Chile and packed into plastic containers. Then they’re loaded into pallets and trucked off to a cold storage facility. Then they’re loaded on a ship in the port of Valparaiso that makes a 12-dayi, 4,000-mile journey to the port of Wilmington, Delaware, where the grapes are unloaded, fumigated, and put into cold storage again. Then they’re trucked off to a distribution center in Baton Rouge, Louisiana, from which they are delivered to your local grocery store.ii

Where you just walk in and pick them up.

Pretty easy. For you.

But also: Kind of a miracle.

What does it take to feed a nation the size of the United States? Well, the good news is … a lot less than it used to.

Here’s what we mean: For most of human history most people have devoted most of their energy to making sure they have enough to eat.

In the year 1870, 50 percent of Americans were farmers and each one of them produced enough to supply about five people. By 1980, only four percent of workers were in agriculture — and each of them could supply food for nearly 70 people.iii

Our productivity gains have been astonishing. In the 70 years from 1948 to 2017, America managed to nearly triple its agricultural output while using only 3/4 as much land and only 1/4 as much labor.iv

Today, the average grocery store is over 50,000 square feet and stocks more than 35,000 items.v Thanks to international trade, we have fresh produce all year round. And, perhaps most importantly, we spend less: The percentage of Americans’ disposable incomes that goes to food has dropped nearly 40 percent since the 1960s.vi

In 2022, nearly half of consumers were worried about carcinogens or “chemicals” in their food.vii And more than half thought that foods labeled “natural” were safer than those that weren’t, even if they had the exact same ingredients.viii

And, no shock here, there’s a lot of money being made off of those fears.

Consider the public’s growing demand for organic food. Since 2005, organic food sales in the U.S. have more than quadrupled.ix More than 2/3 of Americans say they at least occasionally buy organic.x And more than half of them say that organically grown fruits and vegetables are healthier for them than conventionally grown alternatives.xi

Which is not hard to understand. Most of us this “natural” must mean “healthier.” But there’s not much evidence for that belief.

In fact, when scientists at Stanford did the most comprehensive study of organics, reviewing 237 studies … they concluded that there wasn’t any significant difference in healthfulness or nutrition between organic foods and conventional ones.xii

And while organic foods are less likely to have pesticide residues than conventionally grown foods, the levels in both are so safe that scientists have reported the benefits of organics on that front are “insignificant.”xiii

But, so what? If consumers want to pay higher prices for organic food just because it makes them feel better, what’s the problem? Well, there really isn’t one … unless it gets in the way of actually feeding people.

See, here’s the problem: Organic farming is much less efficient than conventional farming. It requires far more land to produce the same amount of food.xiv For many crops, it produces higher greenhouse gas emissions.xv And it almost always makes food more expensive.xvi

Nowhere was that more apparent than in Sri Lanka, where the government recently forced the entire country to go organic.

The result: Sri Lanka’s rice production fell by 20 percent in just the first six months.xvii And the price of rice increased by nearly 50 percent.xviii Exports of tea, the country’s largest cash crop, fell to the lowest levels in nearly a quarter-century.xix Food production became such a problem that 90 percent of families in the country were skipping meals.xx

So, organics as a lifestyle choice? Fine. Organics as a way to feed a society? Doesn’t work.

And this isn’t the only well-intentioned gesture with unintended consequences.

Many consumers also buy local foods to try to reduce their environmental impact. But it doesn’t really have that effect — because for most foods, transportation only makes up a small part of their carbon footprint.xxi

In fact, you could reduce your impact more by skipping beef or dairy one day a week than by buying all your food locally.xxii

And by the way, buying local is one more strategy that can’t feed a nation. To give you just one example of why: If you took all the agricultural land in New York state you’d only get enough food to feed half of New York City. And nothing for the rest of state. And honestly … hasn’t Buffalo suffered enough?xxiii

Although, let’s be honest, we’re all still just gonna buy the Cheetos.

Whether you think American health care is better or worse than the rest of the world, it’s definitely distinctive.
Watch Now... 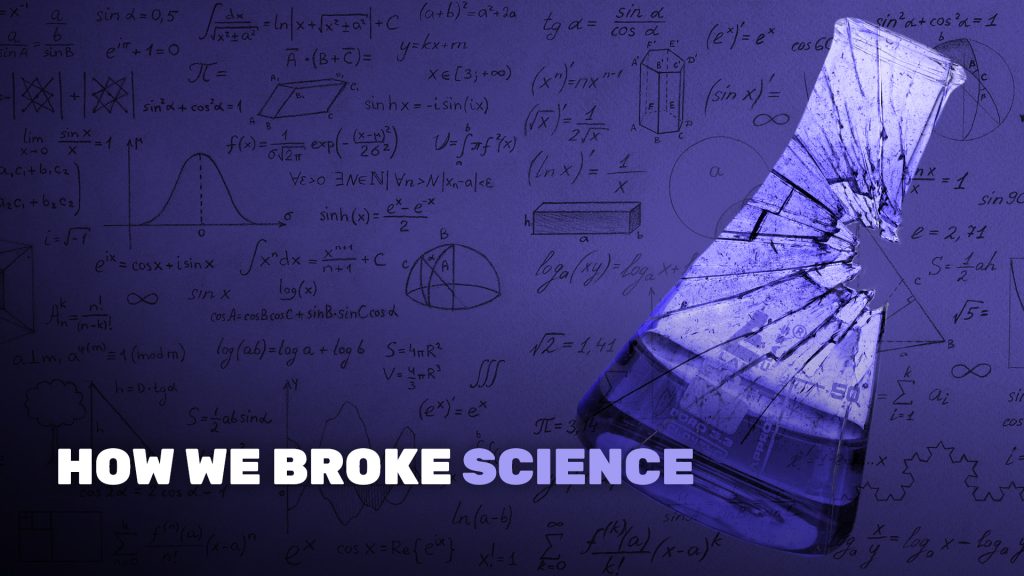 Are we losing our edge on scientific innovation?

Kind of a miracle.

While Chilean grapes may be an extreme example, chances are that even the less exotic items on your plate made a lengthy journey to get there. A 2016 story in The Guardian estimated that the typical food item served in a restaurant travels nearly 1,500 miles before being consumed.

By 1980, only four percent of workers were in agriculture

There’s a widespread stereotype that, as agriculture has become more productive, America’s traditional family farms have been replaced by corporate operations. It isn’t true. According to the U.S. Department of Agriculture, 88% of the country’s output still comes from family farms. The misconception comes from the idea that family farms are, by nature, small. In reality, midsize and large-scale family farms are responsible for 2/3 of America’s agricultural production.

Most of us this “natural” must mean “healthier.”

This misconception is so widespread that it’s been classified as a logic fallacy, known as the “appeal to nature.” In practice, most people’s application of the belief that “natural” is better is selective. Poisons like cyanide are natural, for example, while medical innovations like vaccines are not.

organic foods are less likely to have pesticide residues than conventionally grown foods,

Many consumers have the misperception that organic farming doesn’t use pesticides at all. In fact, the distinction is only about the origins of those pesticides; organic farmers don’t use “synthetic” pesticides, but will use natural ones. But — the “appeal to nature” fallacy strikes again — there is nothing that makes natural pesticides any safer than synthetic ones, and in some cases they can actually be more dangerous.

Why beef or dairy? Food sources vary widely in their greenhouse gas emissions. Cows have an especially large footprint because they are land-intensive to raise and emit methane. On the other end of the spectrum, nuts have a very small impact — and, in fact, are a net positive when it comes to land use — because nut-bearing trees store carbon and often replace cropland.

one more strategy that can’t feed a nation.

The problem with buying local doesn’t just come down to scalability. It also turns out a lot of your favorite foods probably aren’t grown nearby. According to the U.S. Department of Agriculture, only three states in the nation produce avocados or oranges. Only two produce broccoli. And 100% of the nation’s garlic comes from California.