Why our national debt could lead to a crisis

Voyages into the deepest reaches of space.

Wars that could shape the future of the entire planet.

Cutting-edge scientific research that might prevent the next pandemic.

The federal government funds a lot of big, important projects. And, of course, they come with a hefty price tag.

So, how much taxpayer money goes into these kinds of initiatives every year?

Actually, the answer is … none.i

One hitch though: It’s not that these things are free, it’s that…

…we bought the [f**%ing] space station on a credit card?

“The most predictable economic crisis in history.” ii That’s how one former White House chief of staff refers to the inevitable consequences of America’s national debt.

As of 2021, the federal government was in the hole by $23 trillion dollars.iii

Which, let’s be honest, is a big enough number that no one knows what the hell it means.

So, let’s put it this way. If all that government debt got called in tomorrow, every household in America would get a bill for more than $175,000.iv

Which sounds bad, but I don’t know: Does it really feel like a crisis? After all, no one’s actually sending us that bill. And there’s still food on the shelves and cash coming out of ATMs.

So, do we actually need to worry? What exactly is going on here?

Well, it’s actually kind of a classic American story: by which we mean that the country got super-rich … and still managed to blow all its cash.

Now, this isn’t exactly a new phenomenon. The federal government has always had at least some debt, with the single exception of when Andrew Jackson paid it all off in 1835. v

Which, y’know, congrats, Andy, but it’s not like it’s gonna make us forget about the Trail of Tears.

The difference today is just how much debt we have. During the last 80 years, the federal government has spent more money than it’s taken in … in 68 of them.vi And if you do that long enough … it adds up.

The result: We now have more debt than anytime except when we were fighting World War II.vii But back then we stopped the spending spree once the war ended. Today, we’re spending money at levels that are like … well, if World War II went on forever.

So, why doesn’t the government just cut back?

Well, here’s the thing: They can’t. At least not without making a lot of Americans very, very angry.

Because it turns out the biggest culprits behind our debt are popular benefit programs like Social Security and Medicare. viii And the American people, understandably, feel entitled to that money. After all, we see it deducted from our paychecks. Isn’t the whole idea that we get it back with interest when we retire?

Well, about that … The amount of money the government has promised us through those programs … is way more than it actually takes in from our taxes. For example, a typical retired couple will have paid about $160,000 into Medicare over their working lifetimes … and collect more than half a million dollars in benefits. ix

The result: that stat we hit you with up top. In recent years, the amount of money the federal government has taken in through taxes has been eaten up entirely by this kind of mandatory spending.x Every other thing the government does — from NASA to the Pentagon to scientific research — went right on the credit card.

So, what are the consequences if we keep doing this? Well, it could play out a lot of ways … but none of them are good.

Eventually, if the people who hold our debt are convinced there’s too much for us to pay back, they could start demanding much higher interest rates on their loans to us, meaning we’d be even shorter on cash. Now, of course, we could always just stiff them and not pay it back [interrupting self] but ah s*%t, we’d be stiffing ourselves.

Yeah, contrary to popular belief, most of our debt is not held overseas. In fact, China has less than 5 percent of it. xi In reality, the majority of it is held by … us, by Americans. Which means the main people available for us to screw is ourselves.

Now, we could just print more money to try and get out of this bind but that … tends to lead to inflation … which tends to lead to higher interest rates … aaaand now we’re back where we started.

And so, to actually fix it, we’re stuck trying to find a way to balance the books. And here’s the harsh reality: As programs like Social Security and Medicare take up more of the budget, that means less money available for everything else — everything from college aid to stealth bombers.

And no matter what your politics are, you’re not going to like the options: Want to solve it with tax hikes? You could put 100% tax rates on wealthy Americans and all small businesses and still come nowhere close to closing the gap.xii Want to solve it with spending cuts? You could entirely eliminate the Department of Defense and still not have nearly enough cash.xiii

In reality, the only way to find enough money is to make everybody a little unhappy. Higher taxes in some cases and spending cuts in others. And even that won’t get rid of the debt – it’ll just get it out of the danger zone.

All of which sounds pretty awful. But you know what’s worse? Pretending like this isn’t happening. Because the longer we wait, the deeper the hole gets — which means the choices we have to make only get harder.

After all, can you imagine how humiliating it would be to get a space shuttle repossessed?

CORRECTION: At 3:00 in the video, please reference the below Major Components of the Federal Deficit graph (corrected to fix an issue with graphical proportions during production). 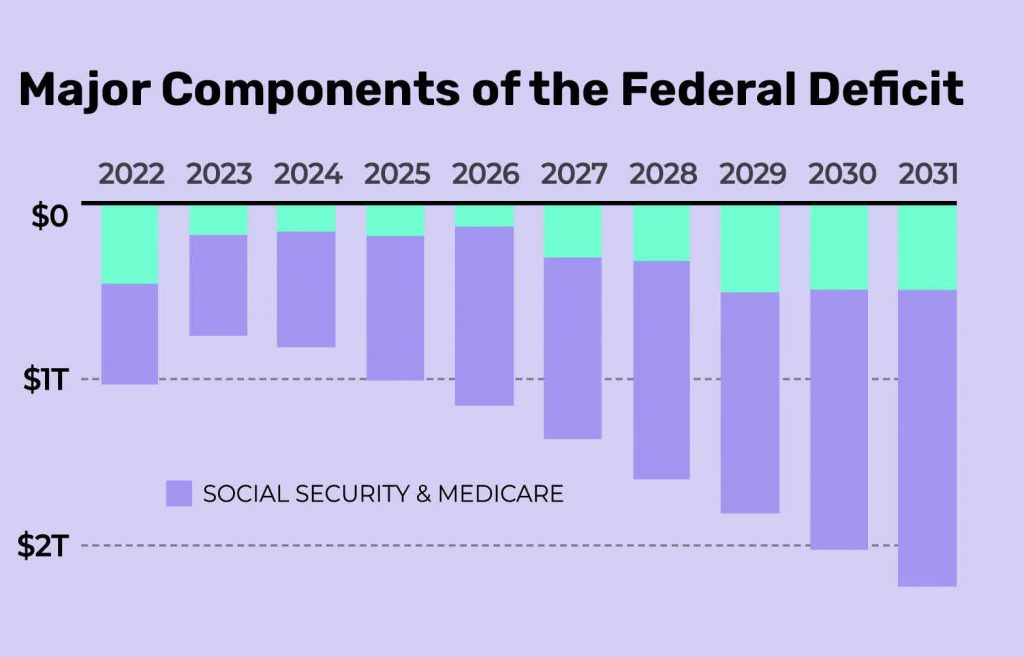 A Revolution in Agricultural Productivity

From organic food to buying local, recent food trends have one thing in common: they can’t go to scale.
Watch Now...

Whether you think American health care is better or worse than the rest of the world, it’s definitely distinctive.
Watch Now...

“The most predictable economic crisis in history.”

In 2010, Erskine Bowles, who served as White House Chief of Staff to Bill Clinton, teamed with former Senator Alan Simpson (R-WY) to co-chair the National Commission on Fiscal Responsibility and Reform, an initiative created by President Barack Obama to explore ways to get the national debt under control. The commission’s recommendations, which included reducing government spending and reforming America’s tax code, went largely unused. Seven years later, the pair wrote that “Many members of Congress have privately told us they would be willing to make the tough votes … but only if members on the other side jump in the canoe at the same time.”

Actually, being Nicolas Cage might not be the worst thing for the country … because he eventually got out of debt. In 2017, it was reported that the actor had blown a $150 million fortune with lavish purchases that included 15 residences, a $150,000 pet octopus, and a $276,000 dinosaur skull (which later had to be returned when it turned out to be stolen). After refusing to declare bankruptcy, Cage adopted an aggressive work schedule that saw him filming four (mostly video-on-demand) movies a year. By 2021, he reported that he was financially in the clear.

when Andrew Jackson paid it all off in 1835.

Andrew Jackson had a hatred of debt that stemmed from his time as a Tennessee land investor. As president, he paid off the nation’s debts through a combination of aggressive spending restraint and selling off western lands. A depression that started shortly thereafter, however, forced the federal government to revert to deficit spending and the country has never again been debt-free.

But back then we stopped the spending spree once the war ended.

Whereas the U.S. had gone to great lengths to pay down its war debt after World War I, the post-World War II decline was less about writing checks than cashing them: the tremendous growth of the American economy after the war’s end in 1945 meant that America’s debt burden became much smaller as a percentage of the country’s GDP.

the biggest culprits behind our debt are popular benefit programs like Social Security and Medicare.

How big? America is on track for $112.5 trillion in deficit spending over the next 30 years. 100% of it comes from the cost of Social Security, Medicare, and the interest costs for the borrowing needed to finance them. Apart from those two programs, the federal budget would otherwise be balanced.

and collect more than half a million dollars in benefits.

If the math is so upside down, how have these programs managed to stay afloat for so long? Demographics. The money we pay into programs like Social Security is not held for our future use, but rather paid out to current beneficiaries. That has become far less sustainable as the ratio of workers paying in to beneficiaries receiving checks has shifted. In 1940, there were nearly 160 workers paying into Social Security for every person receiving benefits. In 2021, there were 2.7.

In fact, China has less than 5 percent of it.

China is not even the leading foreign holder of American debt: that distinction belongs to Japan, which also comes in under 5 percent. Rounding out the top five: the U.K., Ireland, and Luxembourg.