The myth of the glowing green goo

A lot of people think so.

Safety? It’s generated fewer deaths than basically every other power source, so check.i

We hate to be the ones to break this to you, but The Simpsons lied to you about nuclear waste.

Well, to be fair, The Simpsons and pretty much all pop culture … ever.

Here’s the thing: nuclear waste doesn’t actually look like this:

It’s not a green goo stored in a drum that’s one accident away from catastrophe.

It’s a solid and it’s put in steel and concrete canisters that are designed to survive earthquakes, tornadoes, floods, and even attacks with projectiles.ii

It may even be kraken-proof. Can’t know until we try.

But nevertheless people are still so scared of nuclear waste that it’s often enough to stop conversations about nuclear power dead in their tracks.

So, here’s the question: Do the dangers of nuclear waste outweigh the potential benefits of nuclear power?

The reason we’re so much more aware of nuclear waste is that … well, we can see it right there in those concrete casks. It can be contained. All of our other fuel sources, by contrast, send their waste out into the environment.

And here’s the other thing: because nuclear power is so efficient, the amount of waste it generates compared to those other fuel sources is actually incredibly small.

The amount of power an average person uses in a year … would generate nuclear waste about the size of a brick. And the amount of it that would be high-level waste — the highly radioactive material we’re all afraid of — would weigh about as much as a sheet of paper. iii

Think about it this way: For nuclear to generate enough power for one million people, it’d create three cubic meters of high-level waste per year. To get the same amount of power with coal … it’d generate about 300,000 tons of coal ash, which contains contaminants like mercury and arsenic.iv

And, believe it or not, renewables have similar problems. One team of economists estimated that solar power could generate 300,000 metric tons of waste in the U.S. by 2025.v After all, all those used panels have to go somewhere. As for wind power: 720,000 tons of blade material that must be disposed of over the next 20 years.vi

Starts out green. Doesn’t necessarily end up that way.

Now one big difference, right? The waste from coal or wind isn’t crawling with radiation. But even there the danger is a lot smaller than you might assume. The small amount of high-level nuclear waste can, of course, be dangerous. But only if we’re actually exposed to it.

And have you ever noticed that nuclear waste has been around for a long time and that … you know, nothing’s happened?

There’s a reason for that. We’re really, really good at keeping it safe.

In fact, the most severe accident occurred in 1971, when a driver transporting nuclear waste swerved off a Tennessee highway to avoid a crash, throwing a cask of spent nuclear fuel off of the vehicle. The result? Pretty much nothing. The cask stayed intact and there was no radiation released.vii They’re built that tough.

As a matter of fact, the U.S. Department of Energy estimates that over 44,000 shipments of nuclear waste have taken place around the world since the early 1960s and … no one’s ever died from — or even been injured by — radiation.viii In fact, the biggest safety problem has been … activists blocking shipments to protest safety problems.

And that’s not the only time that people with seemingly good intentions have made things worse. Activists also helped to block the use of Nevada’s Yucca Mountain as a permanent storage site for America’s nuclear waste — despite the fact that scientists from the government’s Nuclear Regulatory Commission determined that the site would be safe for … 1 million years.ix

That’s had real consequences for nuclear power. Thirteen states have restrictions on the construction of nuclear power plants, about half of them because there’s no central location to store waste.x

Which is not, by the way, an especially radical idea. There’s already an underground facility in New Mexico, where the government stores nuclear waste generated for military purposes.xi Finland is building its own underground storage site.xii Hell, in Holland they’re so chill about it that they actually store their nuclear waste alongside valuable works of art.xiii The Dutch, man.

Does nuclear waste have the potential to be dangerous? Absolutely. Has it been in practice? Not at all.

Yes, there are risks involved — but that’s true of all our energy sources. So we have to balance those risks against the rewards of cleaner, reliable energy. And so far, all the evidence points to us being able to handle nuclear waste responsibly and safely.

Unless that kraken brings friends. Then all bets are off. 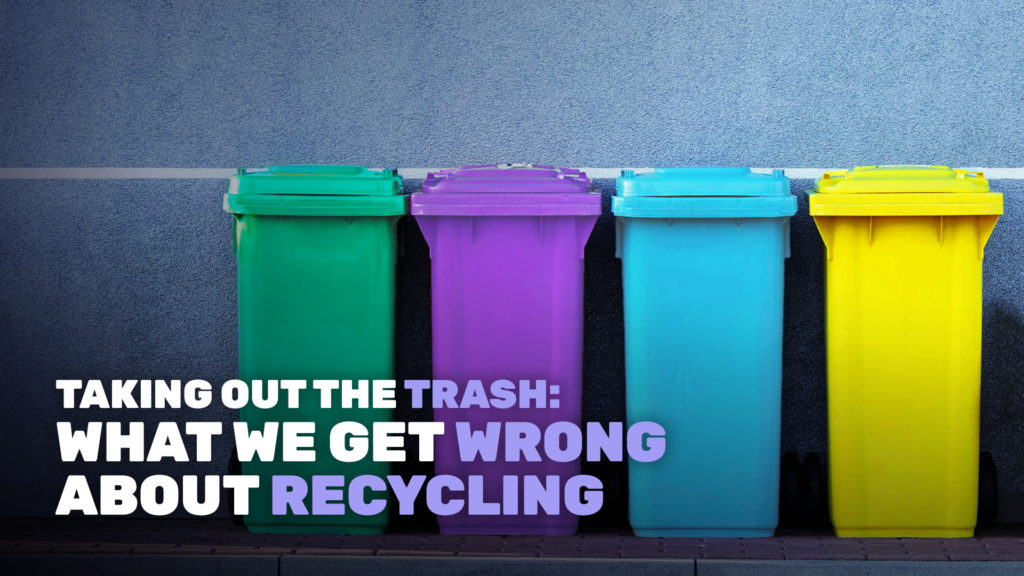 The Surprising Truth About Recycling

In the 1980s, Americans were told that recycling would solve their waste management woes — reducing trash in landfills and facilitating the reuse of plastics. Turns out, recycling isn’t the panacea we imagined it would be.
Watch Now... 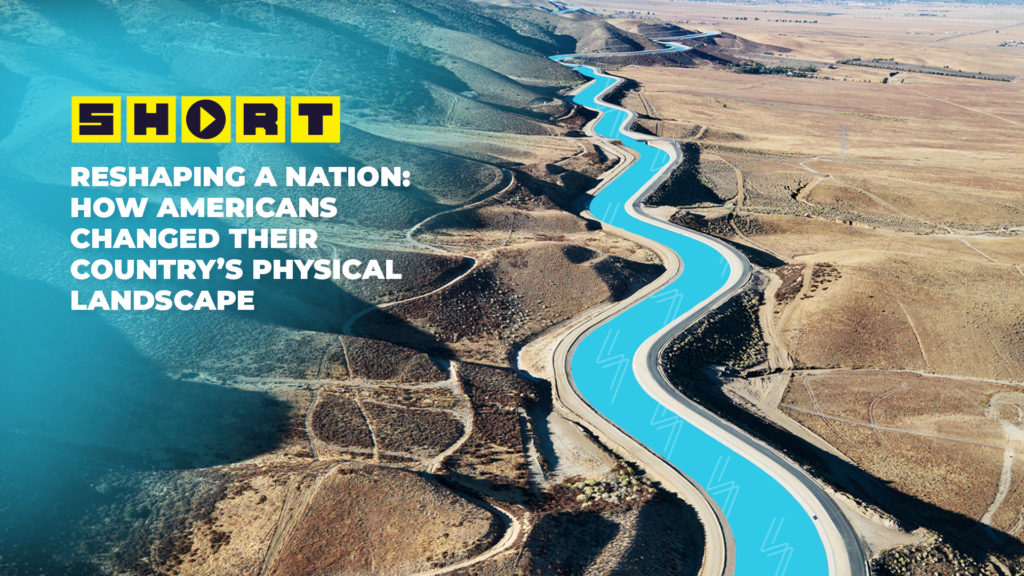 Over the last 250 years, we’ve made big changes to America’s natural landscape. We built a city out of trash. Intentionally flooded a national park. And that’s just the start...
Watch Now...

It’s not a green goo stored in a drum that’s one accident away from catastrophe.

Where does this trope come from? Blame it on radium, a radioactive element that was used to create glowing green watch dials in the early 20th century. The glow was the result of the element’s interaction with a chemical used in the watches’ paint. Tragically, radium’s toxicity wasn’t adequately understood at the time, and many of the workers who handled it later experienced agonizing health problems and premature death.

It may even be kraken-proof. Can’t know until we try.

In 2020, the science show What If? calculated that if krakens were real, they’d be able to exert a force of over 900,000 pounds. While the government has never run a simulation of a kraken attack, we’re delighted to inform you that (1) they have tested the casks used for nuclear waste by firing missiles at them; (2) the casks passed with flying colors; and (3) you can watch a video of the test here.

And here’s the other thing: because nuclear power is so efficient, the amount of waste it generates compared to those other fuel sources is actually incredibly small.

In fact, nuclear energy could be even more efficient in the United States — if we took a lesson from France. The French, who rely heavily on nuclear energy to meet their electricity needs, actually recycle much of their nuclear waste (significant amounts of the fuel can be reused). By doing so, they require 17% less uranium than they would otherwise.

the highly radioactive material we’re all afraid of — would weigh about as much as a sheet of paper.

Sure, this sounds small. But what about when you add it all up? Turns out it’s still remarkably compact. The total amount of waste generated by the commercial nuclear industry since it began in the 1950s could fit within a single football field stacked to a height of only about 10 yards. Coal power, by contrast, produces a comparable amount of waste in only an hour.

Even if there are no accidents, isn’t the public still at risk of being affected by radioactive material being transported through public places? Nope. In reality, we are surrounded by radioactive material in our daily lives. The danger only arises from high dosages. According to the U.S. Department of Energy, the amount of radiation the public is exposed to from nuclear waste shipments is about 0.01% of the amount we get through natural exposure.

Which is not, by the way, an especially radical idea.

While the most common proposal for handling nuclear waste is to store it underground, alternative measures have also been considered. Some experts, for instance, believe waste should be stored above-ground to allow for better monitoring. One of the more eccentric proposals: firing it into space. NASA studied the question in the 1970s-80s and dismissed it as impractical.