This Is Why We Can’t Have Nice Infrastructure

How overregulation stifled our ability to build.

America: We’re a land of constant progress. With each passing generation, we get wealthier, more creative, and more dynamic.

Sometimes it seems like there’s nothing we can’t accomplish.

That’s what we told ourselves anyway...

And then a freaking bridge in Massachusetts had to ruin the whole thing.

This is the Anderson Memorial Bridge. It connects Cambridge, Massachusetts with Boston. It probably doesn’t seem important to you unless you’re trying to get to Harvard—in which case you’ve got bigger problems than can be solved by this video. But this bridge actually explains the answer to a question you hear a lot these days: Why can’t America seem to build anything anymore?

How exactly does it explain it? Well, let’s put it this way: When it was constructed in 1915, the Anderson Bridge took only 11 months to build from scratch.i In 2012, when all they had to do was renovate it, it took about five years.

What happened? How is it that despite 100 years of engineering advances the same project now took five times as long? Did we just forget how to build things in the interim?

Sometimes it feels that way. In the 1930s, the Golden Gate Bridge was constructed in less than 4.5 years.ii The Empire State Building was built in one year and 45 days. iii

More recently? Boston’s overhaul of its highway system, nicknamed “The Big Dig,” took 15 years and cost more than five times as much as projected.

In 2008, California approved plans for a high-speed rail system that was supposed to travel the nearly 400 miles between Los Angeles and San Francisco by 2020. Instead, it got 119 miles of track nowhere near either city—that might be usable by 2027. iv Literally, more people have ridden this train: 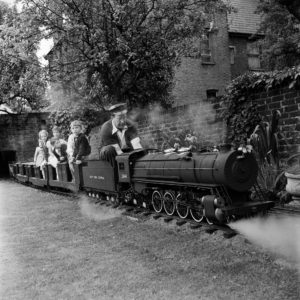 Now, it’s not as if they did everything right in the old days. Eleven people died building the Golden Gate Bridge. And, given the rule of thumb at the time—one death for every million dollars spent on construction—that was actually considered a success.v

But better safety isn’t the reason America is falling behind. After all, countries like Germany and Canada build new infrastructure much faster and cheaper than we do—and they do it without a body count. vi

A big part of the story here in the U.S. is a law called the National Environmental Policy Act. Most people refer to it as NEPA, despite the fact that that makes it sound like an off-brand Pokémon.

NEPA was well-intentioned: its goal was to make sure that new construction factored in environmental concerns.

When it first took effect in the 1970s, the analysis it required from builders before a project could begin would often run less than 10 pages.vii Today, the average is more than 600 pages.

And the average time it takes? More than 4.5 years...to get the paperwork approved!viii

Now maybe it’s all worth it to protect the planet, right? But here’s the craziest part: Nothing about NEPA actually requires that. All you have to do is identify environmental issues. There’s nothing that forces you to actually do anything about them.ix

In fact, in some cases, these regulations actually make us less green.

Plans for the country’s first offshore wind farm, near Martha’s Vineyard, were stuck in the paperwork phase for over three years.x

In Montana, the US Forest Service had to wait over two years for approval to thin a forest to protect locals from wildfires. While they were waiting...nearly half the land burned in a wildfire.xii

Not only are these delays dangerous and inefficient, but they also defeat the whole point of big infrastructure proposals. Because it really doesn’t matter how much money we throw at these projects. Under this system, none of them will get built anytime soon anyway.

And by the way, while we’re on the topic of throwing money at these projects...bit of an issue there too.

The U.S. pays way, way too much for our infrastructure. And hang on, Americans, because this involves the metric system...

And research shows this isn’t about differences in economics or geography. It’s almost all down to bad management. How bad? In 2017, a report in the New York Times revealed that a crew building a new train tunnel under Manhattan had 200 employees with no identifiable responsibilities—each being paid about $1,000 a day.xiv

It doesn’t have to be this way. Throughout our history, America has produced marvels of engineering and architecture. We’ve done it quickly and cost-effectively. And there’s no reason we can’t do it again.

But if you think we can do it under our current system of regulations... we’ve got a bridge to sell you.

In 2012, when all they had to do was renovate it, it took about five years.

The Anderson Bridge reveals that not all delays owe to federal regulations like those found in NEPA. Most of the holdup owed to state and local restrictions, which were so granular that they even specified what kinds of bricks could be used in construction.

The Empire State Building was built in one year and 45 days.

Other examples of speedy construction: At the beginning of the 20th century, the entire New York City subway system was made operational in less than five years. In 1942, the 1,700-mile Alaska Highway was built in 234 days. The following year, the Pentagon—the world’s largest office building—was completed after just 16 months of construction.

countries like Germany and Canada build new infrastructure much faster and cheaper than we do—and they do it without a body count.

China is often cited as another example of a country that can build infrastructure quickly, but...there’s a body count. Construction is considered China’s most dangerous industry. A government report in 2018 disclosed 1,732 construction accidents and 1,752 deaths—in only the first half of the year.

In fact, in some cases, these regulations actually make us less green.

One counterintuitive example of this trend: Deep-red Texas actually has more than double the amount of wind power of true-blue California. Why? The disparity owes at least in part to a much more stringent approval process in the Golden State.

Under this system, none of them will get built anytime soon anyway.

One person who learned this lesson the hard way: President Barack Obama. In 2009, the Obama Administration’s stimulus package allocated over $48 billion for infrastructure spending, with the White House claiming that the projects were “shovel ready” and construction could begin immediately. In later years, Obama would concede that he had learned “there’s no such thing as shovel-ready projects.”

It’s almost all down to bad management.

we’ve got a bridge to sell you.

The phrase “I’ve got a bridge to sell you” has its origins in a different kind of infrastructure spending. In the late 19th and early 20th century, a con man named George C. Parker repeatedly ‘sold’ the Brooklyn Bridge to gullible buyers who believed they’d grow wealthy off of the resulting fees. Parker’s hustle also included ‘sales’ of other New York City landmarks like Grant’s Tomb, the Metropolitan Museum of Art, and the Statue of Liberty.